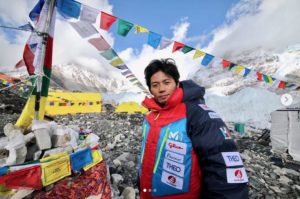 While moving down from Camp III to Camp II on Everest, Nobukazu Kuriki went missing after sending a radio message to his guides for help.

During Nobukazu Kuriki’s eighth attempt at climbing Mount Everest, the Japanese climber sent out a radio message to his camping guides while located between Camp II and Camp III on the mountain. Unfortunately, it was the last anyone ever heard from him.

Kuriki went missing since 11:30 pm following his message to the guides. Rescuers were able to retrieve his body around 7,200m by Camp II, according to his guide, Ashish Gurung. Kuriki, age 35, was pronounced dead last night May 20, 2018. His body is being returned to Kathmandu.

This was the second death on Everest in recent days, as a Macedonian climber passed away descending Everest on Sunday. Kuriki is another big name in the climbing community to die on Everest, and the third to die since this Everest season opened.

World-renown Swiss alpinist Ueli Steck died in 2017 due to an accident while climbing in the Khumbu region, training for an alpine-style Everest climb. Steck, also known as the “Swiss Machine,” was one of the best climbers in the world.

The Outdoor Journal has covered Kuriki before, most notably during 2015 when he became one of the first climbers to receive a climbing permit following the earthquake in Nepal, which claimed over 9,000 lives and 19 on Everest itself.

“The main purpose of my climb is to spread the message that Nepal was safe for climbers and trekkers even after the earthquake,” Kuriki told reporters.

According to Kuriki’s climbing guide, he was asking for help due to suffering from a persistent cough and pain, which he documented on his Facebook page. “I am here at 7,400 metres now. Now, I feel the pain and difficulty in this Mountain and I’m up and up. I want to make it very carefully,” one of his final posts read. Unfortunately, the team was unable to locate him once the radio disconnected.

I am now feeling this suffering and difficulty of the Everest, and with appreciation, I’m climbing.

I want to do this (accomplish) very carefully.

Everyone, thank you so much for your support.

I hope that this post will be helpful for people who, just like me, are taking a challenge in life.

I wish I could climb together with everyone. Thank you for your support.

Kuriki had a long history on the mountain. Kuriki was unable to finish his eighth Everest climb, a mountain that claimed nine of his digits back in 2012 due to severe frostbite. Despite the tragedy, Kuriki returned to Everest once again in 2015.

Kuriki took to the mountain with a full film crew as well as four high altitude workers alongside him. He was attempting to climb Everest all by himself from the West Ridge route without the use of supplemental oxygen. Kuriki reportedly made it back down to Camp III before finally asking for help.

While Kuriki was unable to complete an Everest climb in his eight attempts (the seven previous attempts all took place in autumn, while spring season is the most popular time to climb), his resume includes successful climbs of Denali, Kilimanjaro, Elbrus, Aconcagua, Dhaulaguiri, and many others.

Kuriki’s official cause of death is still unknown, but The Outdoor Journal will provide updates as more information surfaces.