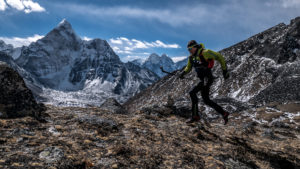 Ueli Steck Heading Back to Everest with Big Plans

The “Swiss Machine” Ueli Steck is one of the world's best alpinists alive today.

He has already climbed Everest without supplemental oxygen once and has many other Himalayan ascents to his name. Now, after a foiled 2013 bid, he will attempt perhaps the most ambitious, Himalayan climbing expedition ever: an alpine-style enchainment of Everest and Lhotse.

News Update: Ueli Steck has died in a fall on Nuptse face while training for the Everest push. Our community mourns his loss. Read The Outdoor Journal’s obituary of this generation’s greatest alpinist here.

Ueli Steck is heading back to Everest! The Swiss alpinist and two-time Piolet D’or winner is headed back for unfinished business on the world’s tallest mountain and its neighbours. In 2013, Steck, Simone Moro and Jonathan Griffith hoped to make the first link-up of Everest (8,848 m) and Lhotse (8,516 m), and in the process complete the first repeat of Everest’s Hornbein Route. Those plans were derailed after their now infamous confrontation with Sherpa fixing ropes for the season’s commercial Everest expeditions. So now, four years later, Steck will try his hand once again on the Everest-Lhotse traverse.

“This Hornbein Route is a big story,” by itself, he says, even without the Lhotse link-up in the equation. “There’s lots of history there. It’s never been repeated. To be honest, even if we climb just the Hornbein and we’re too tired to get to Lhotse, I’ll be happy.” (The Hornbein Couloir—the route’s most prominent feature—“has been repeated starting in Tibet and going straight up,” Steck says, but the entire route has not seen a second ascent.)

His partner this go around is Tenji Sherpa, a young climber Steck calls part of “the new generation of Sherpa that really want to climb.” Tenji and Steck climbed Everest together in 2012 without supplemental oxygen, and have since then joined forces on the North Face of Cholatse (6,440 m), in the Himalaya, and on numerous objectives in the Alps, including the Eiger (3,970 m), the Jungfrau (4,158 m), and a tandem paraglide from the Jungfrau back to Interlaken. “He really enjoys climbing,” Steck says of Tenji. “It’s why we get along so well together.”

The traverse will take the two climbers on an unprecedented tour of Everest and Lhotse. The Hornbein Route, climbed in 1963 by Tom Hornbein and Willi Unsoeld during the first successful American expedition to Everest, starts by ascending to Camp 2. At that point, following the original route, Tenji and Steck will cut sharply left toward Everest’s left shoulder in a big traverse that will take them to the Hornbein Couloir. After exiting the Couloir, rejoining the West Ridge, and summiting Everest, the plan is then to “go down the South Col, make a traverse, and eventually meet up high with the normal Lhotse route.” From there, they’ll only need to climb several hundred meters upward to the summit of Lhotse, after which the pair will descend back down to Camp 2.

Or will they perhaps keep going? Talking with Steck via Skype, I mention that there are rumours that he might try to enchain a third mountain. “Where did you hear that?” he says, laughing. “The full ‘horseshoe’” of the cirque includes “the whole traverse, up to Nuptse,” Steck says. Full stop from the Swiss Machine. “Well?” I ask him, a hint of exasperation in my voice. “I have the permit for Nuptse,” he says with a chuckle. “So who knows? We may just do Nuptse to get acclimatised.” Despite his coyness, the unspoken is abundantly clear: If he and Tenji are feeling strong and have a weather window, the possibility exists that they’ll push on to Nuptse (7,861 m) after Lhotse.

The Everest-Lhotse traverse will be feat of endurance and commitment unrivaled in the world of high-altitude alpinism. “If you climb just Everest, it’s like running a marathon,” Stecks says. “But now we’ll be trying an ultramarathon.”

The traverse doesn’t entail the same degree of risk as many of Steck’s more technically difficult ascents, but he’s perfectly happy about that.  “I’ve reached a point in my climbing where I realized if I keep moving in that direction”—of speed soloing things like the Eiger North Face—“I’ll kill myself,” Steck says.  Rather, the expedition will require the entire skillset that he has honed over a 20-year career.

Tenji and Steck intend to move quickly, but not too quickly. While he feels confident they could climb from Camp 2 to Everest’s summit in a single-day push, he expects to spend at least one night bivvying on the Hornbein Route: “We have to be careful. We need to have energy to get up Lhotse. It doesn’t make sense to do one push to the Everest summit and then be too tired for Lhotse.”

They’ll also travel with frighteningly few supplies. They’ll have a sleeping bag weighing around 400 grams, but no tent. “Rest for a couple hours, and then keep moving,” Steck explains—that’s the name of the game.

Whether or not he and Tenji Sherpa are successful remains to be seen for at least another month. After flying out of Switzerland on April 8, Steck will meet up with Tenji and the two will make their way to the mountains. Then the acclimatisation and waiting games begin.

Both climbers have already been preparing for months—Steck even joined Tenji in the Khumbu in February, where they did a bunch of altitude training, logging 240 kilometers and 16,000 vertical meters in just 13 days—but they will continue training their bodies over the coming weeks, trying to reach peak fitness around May 20. Prior to mid-May the weather is usually too cold to attempt Everest. But after that, weather permitting, it’s open season.

Check back with The Outdoor Journal for updates on Ueli and Tenji’s expedition as well as other news from the 2017 Everest season!

For a talk with Ueli after he climbed 82 four-thousanders, alpine style, spread over Italy, Switzerland and France in 62 days, head here.