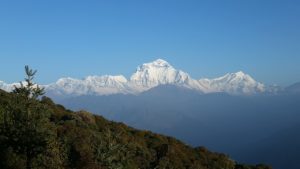 9 Climbers Die at Gurja Base Camp: What We Know So Far

Even if many questions remain unanswered, a tragedy that seemed bizarre at first has slowly come to reveal itself, as a five member South Korean expedition and four Nepali guides die during a violent snowstorm.

Since this article was published, The Outdoor Journal has published an update to this story, entitled: Update: 9 Climbers Die at Gurja Base Camp. What Really Happened? The Experts Opinion.

The Himalayan Times were the first to report that “at least nine climbers including five Korean nationals were killed when a massive landslide buried the base camp of Mt Gurja (7,193 metres) on the lap of the south face of Mt Dhaulagiri in western Nepal”. This was according to the expedition organiser, Wangchu Sherpa, Managing Director at Trekking Camp Nepal.

“Endless glaciers under my feet make my heart throb, I feel like I should discover every corner of the Himalayas.” Kim Chang-ho.

It was the deadliest accident within Nepal’s climbing community since 2015, and those that passed away included decorated Korean team leader Kim Chang-ho. Kim had previously topped the world’s 14 highest peaks, in record time, and was of the few that had done so without the aid of oxygen. The rest of Kim’s team, from the Korean way Gurja Himal Expedition 2018, included Lee Jaehun, Rim Il-jin, Yoo Youngjik, and Jeong Joon-mo. The Nepali support team who also lost their lives were named as Chhiring Bhote of Hatiya-2 , Dena Angjuk Bhote of Hatiya-6, Phurpu Bhote of Hatiya-6 all in Shankhuwasabha district, and Natra Bhadur Chantel of Dhaulagiri Rural Municipality-1 in Myagdi district.

The climbers were waiting out the weather as they planned on a summit attempt, the nearby 24,000 foot Gurja. Only 30 people have successfully reached this peak, in stark contrast to the 8000 people who have made the summit of Everest. The goal of this particular expedition was to establish a new route to the summit, and name it Korean Way: One Korea – Unification of North and South Korea. However, in the early hours of Friday 12th October, a violent snowstorm hit the camp and the BBC reported on a freak accident that scattered the bodies as far as 500m, but contrary to the Himalayan Times did not report a landslide or avalanche.

The Kathmandu Post reported that upon arriving at the camp, Nepali climbing guide Lakma Sherpa said “When a team of locals reached the site, it was clear immediately that the camp was hit by snowstorm” and that “officials suspect that a massive avalanche on the mountain may have triggered the snowstorm.”

Meanwhile, Shailesh Thapa Kshetri, a police spokesman in Nepal, told the New York Times that it was unlikely that an avalanche had struck the team, because the bodies were not buried.

Among the dead was Kim Chang-ho, a decorated climber who scaled the world’s 14 tallest peaks, including Mount Everest, in a world record time. https://t.co/NLL6MChfw5

The reality of what had happened in base camp on Friday night is clearly open for debate. However, all eyewitnesses were agreed upon a scene of total destruction. Helicopter pilot Siddartha Gurung told AFP: “Everything is gone, all the tents are blown apart”. Dan Richards of Global Rescue, a US-based emergency assistance group assisting in the retrieval effort that “Base camp looks like a bomb went off” and “at this point we don’t understand how this happened. You don’t usually get those sorts of extreme winds at that altitude and base camps are normally chosen because they are safe places”. Suraj Paudyal, a member of the rescue team hypothothsised when talking to CNN “It seems that a serac (a piece of glacial ice broke) and barreled down the couloir (a gully on a mountainside) from the top ridge of the mountain and the gust created the turbulence washing the climbers and staff from their tented camp at the base camp”.

There are clearly more questions than answers remaining, but perhaps those questions will begin to be answered over the next few days as investigations continue.

On Saturday, a helicopter was dispatched to the site and the bodies of the victims could be seen. However, due to high winds, and not having a safe place to land, the helicopter was forced to return to base. Locals reached the basecamp on Saturday evening, but were again beaten back by the weather, before the helicopter again returned in the early hours of Sunday morning, and all nine bodies were recovered within a couple of hours.

Eight of the bodies have now been airlifted back to Kathmandu, whilst the body of local Netra Bahadur Chhantyal was handed over to his kin upon retrieval.

Having become the first Korean to summit Everest, Kim was once quoted as saying “Endless glaciers under my feet make my heart throb, I feel like I should discover every corner of the Himalayas.”