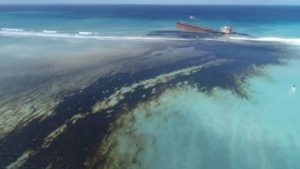 A Disaster in Paradise: The Mauritian Oil Spill

“This is likely one of the most terrible ecological crises ever seen on the small island country,” Greenpeace Africa said in a statement Friday.

Aerial images show the scale of the disaster, a dark slick spreading in the azure sea around the marooned cargo ship, thick muck coasting the mangrove forests and oily waters lapping the once white sandy shore, exacting irreparable harm and undoing years of painstaking conservation work.

“This oil leak is not a twist of fate, but the choice of our twisted addiction to fossil fuels”

25th July the MV Wakashio, owned by Japanese company Nagashiki Shipping, ran aground at Pointe d’Esny, a known sanctuary for rare wildlife, off the southeast coast of Mauritius. The carrier, en route from China to Brazil, held almost 4,000 tonnes of fuel oil, 200 tons of diesel, and 100 tons of lubricant oil. Despite local residents warning on the 5rh August, that the ship appeared to be sinking, it took several days for the government to take action. “The delay in trying to address the problem of this wreckage on our reef I would say is one of gross negligence by our authorities and our government… no one considered the danger that the 3,800 metric tonnes of oil the ship was carrying would present, or considered the heavy risk this would present to the island and the lagoon, no one cared about it… the government sat on the file for more than 12 days without making the decisions that should have been made”.

Since the weekend, thousands of volunteers, many smeared from head to toe in black oily sludge, have ignored official instructions to stay away and instead have been collecting straw from fields stringing together miles of improvised floating barriers in a desperate attempt to hold back the oily tide. Some 400 sea booms, mostly homemade, have been floated out into the lagoon so far, in an attempt to prevent the oil spreading in the strong marine currents. Surface oil is also being pumped out of the ocean. “In terms of the efforts that are being put into the clean-up, to the civil societies, NGOs, service clubs and others, have surpassed the government to a large extent in terms of trying to deal with cleaning, mitigation and trying to contain the spreading of oil,” says Mauritian ecologist, an environmental expert and former global strategist for Greenpeace International, Sunil Dokwarkasing.

More than 1,000 tonnes of fuel has already seeped from the bulk carrier MV Wakashio into the sea off south-east Mauritius, polluting the coral reefs, white-sand beaches and pristine lagoons that attract tourists from around the world. But experts say that large cracks are appearing have appeared in the ship, which still has 2,500 tonnes of oil on board, which is being removed, but not fast enough and still threatens an even greater ecological and economic disaster. Prime Minister Pravind Jugnauth, said response crews had managed to stem the leak for now but were bracing for the worst. “The cracks have grown. The situation is even worse… The risk of the boat breaking in half still exists.” Dokwarkasing says “The oil spill and the ecological crisis happening right now in Mauritius will have an everlasting impact on the natural ecosystem, the marine ecosystem of the lagoon… this is a fact.”

“We must react by accelerating our withdrawal from fossil fuels…”

Mere months ago, days before the world locked down with COVID 19, I was in Mauritius, working with a newly opened Eco Voluntourism organisation, Kestrel Valley Conservation Experience and their conservation partners, the Mauritian Wildlife Foundation. Our accommodation overlooked the turquoise waters of the very lagoon that is now falling victim to the leaking oil. I’d swum in the bay with local NGO Eco Sud monitoring the island’s critically endangered hawksbill turtles and taking part in a coral farming project. I can only imagine how these pristine waters and the wildlife and coral they contain, all smothered in oil. I had also visited the tiny rocky wildlife sanctuary of Ile aux Aigrettes where resident scientists from the Mauritian Wildlife Foundation had introduced me to some of the island’s more endemic and endangered birds, reptiles and plant life, which have all been brought back from the brink of extinction through hard work and perseverance. These same scientists and wildlife workers have now had to ferry dozens of baby tortoises, rare birds, and endemic plants from the island to the mainland in an attempt to save them from destruction.

Akihiko Ono, president of the shipping company, has told a press conference in Tokyo “we apologise profusely and deeply for the great trouble we have caused… we will do everything in our power to resolve the issue.” The Japanese foreign ministry says the country is planning to send a six-person disaster relief team. France is also sending a specialist team and equipment. Meanwhile, police in Mauritius, say they have been granted a search warrant and are preparing to board the ship and conduct a search with a view to taking away items of interest, such as the ship’s logbook, in order to help with an investigation.

Greenpeace’s Happy Khambule concluded, “there is no guaranteed safe way to extract, transport and store fossil fuel products. This oil leak is not a twist of fate, but the choice of our twisted addiction to fossil fuels. We must react by accelerating our withdrawal from fossil fuels… once again we see the risks in oil: aggravating the climate crisis, as well as devastating oceans and biodiversity and threatening local livelihoods around some of Africa’s most precious lagoons,”.

Meanwhile, the slick has already begun drifting further up the coast, fanned along by strong winds and currents.

If you would like to help financially and contribute to the MWF Wakashio Fund you can donate online via the MWF website https://www.mauritian-wildlife.org/donate mentioning ‘Wakashio’

You can also make a direct bank transfer to: