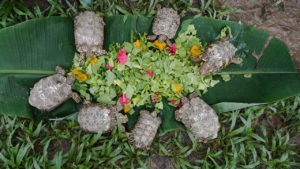 In a unique repatriation mission, over 50 Indian Star Tortoises are finally flying home from where they were originally smuggled and sold into Singapore as victims of illegal wildlife trafficking.

This story was made available to The Outdoor Journal via a Wildlife SOS press release.

The 50 Indian Star Tortoises tortoises had been smuggled into Singapore illegally where they were confiscated by Singapore authorities. With cooperation from the Indian & Singapore Governments, they will now be repatriated to India and returned to their natural habitat in the forests of Karnataka.

In a first-of-its-kind initiative, India based wildlife conservation charity Wildlife SOS working closely with the Ministry of Environment, Forests & Climate Change, Govt. of India secured permissions to repatriate the tortoises indigenous to India. Investigations confirmed Karnataka was the origin of the tortoises. A team of senior forest officers travelled with Wildlife SOS CEO Kartick Satyanarayan to Singapore to conduct physical inspection of the tortoises housed at the ACRES rescue center.

Singapore Airlines contributed to the cause of wildlife conservation by transporting the tortoises for free.

The tortoises were transported in specially designed boxes for the long plane journey and upon arrival in India, received by a team from Wildlife SOS including co founder Geeta Seshamani and former Chief Wildlife Warden and Head of forest force of Karnataka Mr. BK Singh.

Once the tortoises have completed their quarantine period of 3 months, Wildlife SOS intends to initiate radio tagging and monitor these animals for survival. This landmark project not only helps augment the endangered populations in India, but will also demonstrate the commitment from the Governments of India and Singapore and their zero tolerance to illegal wildlife trade.

Indian star tortoise is protected under the Wildlife Protection Act, 1972 and listed in Appendix II of CITES (Convention on International Trade in Endangered Species of Wild Flora and Fauna), which regulates international trade of wildlife. Yet it is one of the most trafficked tortoise species in the world owing to the unique star-like radiating pattern on their shell. The Indian Star Tortoise is poached extensively for their meat and use of their body parts in traditional medicine as well as for the exotic pet trade. Illegal trafficking of tortoises from Southern India to places like Singapore, China, Honk Kong Thailand, Malaysia etc. fuel the demand for this species.

Kartick Satyanarayan, Co-founder & CEO – Wildlife SOS said, “I am relieved that these tortoises are finally coming back to where they belong. I’m also delighted that the partnership between Wildlife SOS and ACRES resulted in a successful repatriation project. I’m grateful to the Ministry of Environment, Forests & Climate Change (MoEF& CC), DGCA & Customs officials, Ministry of Agriculture, Government authorities of India & Singapore, Chief Wildlife Warden of Karnataka for their support and guidance.”

Anbarasi Boopal, Deputy Chief Executive of ACRES, said, “The odds never favoured us but our perseverance and sheer will together with support from Wildlife SOS paved the way for us to repatriate these animals. Blue, Rahayu and Boltz are just some of the animals we have repatriated in the past years which has led to our largest repatriation ever – the Indian star tortoises. We will continue our fight to end the illegal wildlife trade and strive to ensure that these animals stay where they belong – in the wild.”

Geeta Seshamani, Co founder & Secretary-Wildlife SOS said, “While we work together to put an end to illegal wildlife trafficking, it’s critical that such repatriation efforts are made to return these unique animals to their native habitat.”

Shri C.Jayaram, IFS, PCCF (Wildlife) & Chief Wildlife Warden of Karnataka said, “The Karnataka Forest Department is extremely happy to be a part of this unique opportunity to rehabilitate and release these tortoises back into their natural habitat.”

Dr Arun. A. Sha Director- Research & Veterinary Operations, Wildlife SOS said, “A team of Wildlife SOS field researchers will track these animals. A special soft release – anti predatory enclosure has been built by Wildlife SOS to prepare the tortoises for release into the wild. Each Tortoise will have visual identification (unique code on its carapace & plastron as well as microchips to identify individuals.”

Wasim Akram, Manager Wildlife SOS Special Projects said, “We have been working closely with the State forest department to identify a suitable location for soft release of these tortoises into their natural habitat. We will be installing radio telemetry devices (tags) to carry out post release monitoring to ensure their survival in the wild.