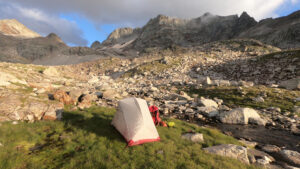 Madman’s Promenade – Part 1: The Three Rules of the Pyrenees

Louis-Philippe Loncke is known as the "The Mad Belgian" for good reason, and his unsupported, heavyweight trek across the entire Pyrenees proves it.

Louis-Philippe Loncke left the town of Hendaye, France’s most southwesterly point and a popular seaside tourist resort, with three rules – never restock, always sleep in a tent, and no outside help. [Listen to the podcast episode here.]

With 700 kilometers in front of him, Loncke carried all of his food and equipment in a painfully heavy, 49 kg backpack across the Pyrenees mountain range, traversing France, Spain, and Andorra. When he arrived in Banyuls 43 days later on September 7th, 2020, Loncke achieved another world first with his completely unsupported mission.

“There is nothing more difficult than unsupported, it’s the last challenge, to cross a defined geographical area. “

Loncke is a world specialist in heavy load expeditions. He previously received the 2016 European Adventurer of the Year for his crossings of three deserts – Death Valley in the U.S., the Simpson Desert in Australia, and both Salars in Bolivia – all self-supported. On his 52-day winter crossing of the Tasmanian wilderness, over 500 km, the locals nicknamed him “the Mad Belgian.”

“In any of my expeditions that are unsupported, if you have a problem when you’re alone, you cannot call for help. So it’s game over.”

Loncke’s lone journey across the Pyrenees started out with a bad omen after he narrowly escaped death by falling into a five-meter ravine. Over the next 43 days, he would battle thunderstorms and hail, unseasonably cold temperatures, and dangerously low food rations. By the end, Loncke lost 11 kg (almost 25 pounds) and his legs ached for the next two months.

With no team to help plan logistics, or arrange food drop-offs, it was solely up to Loncke to decipher the puzzle of the Pyrenees – to solve the mathematical problem of how much a human can possibly carry to cover the geographical distance from sea to summit to sea. Luckily for Loncke, the Pyrenees, which are older than the Alps, are known for their rare amount of usable passes at high elevation.

Read next on TOJ: An alpine style “ultra-journey” through Maharashtra, India to climb 200 historical, yet largely unknown forts.

Although he did slip and fall backward many times, even cracking his hiking pole in twain, Loncke’s worst fear on the journey was a face-first fall.

“Fear is always present. Fear is a necessity. Fear prevents you from doing something stupid.”

On each high-pass descent, Loncke risked falling forward on rocky terrain. With 49 kg on his back, over 100 pounds at the start, even if he tried to brace himself with his arms, he would not have enough strength to break his fall, which could be fatal. Even so, Loncke could not afford the extra weight of wearing a helmet.

“Everyone has a different idea of what a kilogram is. Above 40 kg is constant pain.”

Although the heavy bag is a constant burden, walking slowly through beautiful landscapes is a more immersive and even meditational experience than a fast through-hike.

“With immersion and self-sufficiency, you can enjoy the moment way more. You feel not just in nature, but part of nature.”

With age and experience comes wisdom. As Loncke can see the end of the tunnel on his days of heavy-load expeditions, he is grateful for the maturity that he has gained over the years of bushwacking.

“Fortunately, I was mature enough to go slowly because I don’t have the powerful legs of a really good soccer player or rugby man.”

The second biggest threat to Loncke’s success was the Pyrenees’ notoriously bad weather. It’s very common for thunderstorms to roll in each afternoon, which can pin climbers in precarious positions, making it impossible to camp at lower elevations. Over the past 10 to 15 years, a number of hikers have been struck by lightning.

Read next on TOJ: The Human-Powered Rule: Europe to Kilimanjaro Without a Motor

Even so, Loncke appreciated a reprieve from the brain-melting heat of his desert crossings.

“If you don’t have enough water above 55 degrees Celcius, the cells in your brain are literally exploding.”

The Pyrenees crossing differed from all of Loncke’s other expeditions in that it was the first time that he would encounter people, other hikers, many of whom were eager to share their moral support. On the flip side, this new variable put him face to face with doubt, as the locals would tell him that what he was doing was too dangerous, or just plain stupid.

Despite the fact that this decision might put the entire expedition in peril, Loncke took a detour to the highest peak in the region – Pico Aneto – which stands 3,404 meters.

“I thought it would be a shame not to attempt it, although I knew I would lose and day and possibly get extra tired.”

Loncke reached Pico Aneto on the 25th day of his expedition, although he reckons someone could reach it in 10, given they go without extra supplies to finish the entire 700km, which is five times the height of Everest.

“I thought it was important to go from the sea to summit to sea.”

Loncke is a stickler when it comes to conceiving his world-first challenges.

Loncke hates it when others take shortcuts across countries. He won’t settle for anything less than the maximum possible lengths. Beyond politically defined borders, he pays close attention to natural geographical dividers like rivers and lakes.

This unsupported Pyrenees crossing marks the end of an era, so to speak, as it’s the last heavyweight expedition for Loncke. [Stay tuned to The Outdoor Journal to learn about Loncke’s extreme training regime in Madman’s Promenade – Part 2.]

“I don’t want to have joint problems when I’m older, but perhaps it’s already too late.”

After 43 days of glorious pain, Loncke flagged down a car with Belgium plates and hitched a ride back towards Belgium.

In this episode of The Outdoor Journal Podcast, Loncke discusses what one mistake put his safety in jeopardy, his extreme training challenge to get in shape for the Pyrenees, and the “why” behind his latest world record attempt. [Listen to the podcast episode here.]

Read next on TOJ: Madman’s Promenade- Part 2: Everesting the Most Extreme Staircase in the World