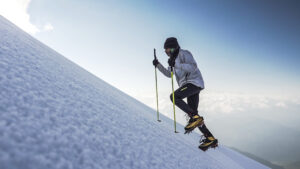 A Calculated Risk to Set a Record at 5,000 Meters – Ditch the Rope

Kieren D'Souza makes a calculated risk to summit 5,000 meter Friendship Peak without ropes or an ice axe in his latest speed record attempt.

In Part 1 of our story Kieren D’Souza, we detailed how India’s premier Trail Ultra Runner dreams up never before attempted mountaineering speed ascents in his home of Manali. In that post, D’Souza runs a speed ascent up Deo Tibba, a 6,000-meter peak. In order to reach the summit and return to his home in the valley below, D’Souza sprinted up the mountain as an ultra-runner looking to push himself and set a record time, refusing to rope up until the final 100 meters. In Part 2, D’Souza takes on Mount Friendship, a 5,000-meter peak, but this time he does it without any ropes.

A Calculated Decision on Mount Friendship

In June of 2020, D’Souza set his sights on Mount Friendship, a 5,289 meter high Himalayan Summit near the town of Manali in Himachal Pradesh. He filmed the ascent to highlight the rebellious, underground, almost illegal nature of the challenge. Running in an alpine, minimalist style, one could argue that D’Souza was dangerously unprepared.

“On Friendship, I ended up going to the peak without any ice ax, ropes, nothing. It was a calculated decision not to do that, but when I was on the way down from the summit, I realized that it was a bit too steep for me. So I had to turn around to down-climb and use my hiking poles as ice axes to some extent.” [Listen to this episode of the podcast].

D’Souza’s ability to merge alpine-style mountaineering with ultra running with his life on the line was a project six years in the making.

“I have been sitting on the idea of doing Friendship peak in this style since 2014. That’s when I first thought of it.”

D’Souza ran to the peak from the heart of Manali town and back in under 12 hours, including the 15 minutes he took to connect with his supporters at the summit via Instagram live.

D’Souza’s most harrowing moment in the mountains came during another Fastest Known Time challenge he deemed the “Triple Trouble Circuit” which traversed two Himalayan mountain passes.

“I did 126 km over two mountain passes that were both 4,000 meters plus. Just after the first pass, I’d been running all night and I needed to cross the river but I was exhausted and not thinking straight, not feeling my strongest. I missed crossing the river and ended up in a sticky situation where I was on a rock-face for a 100-meter batch where if I slip I’d end up 300 meters down in the river, so I had to reel in my thoughts, focus on everything, and be very present.”

Read Next on TOJ: Ultra runner seeks out catalytic barefoot running challenges that bring him to a higher plane of self-knowledge.

Run Before You Can Walk – Quick Transition to Ultras

In what he would surely call a foolish decision, D’Souza leaped too quickly into the world of ultras. He only took a two-year gap between his first 10k and first 100k, and he completed that race even before trying a marathon.

Despite his hasty foray into the big leagues, D’Souza is quick to share technique tips for beginner runners or hobbyists who aren’t yet on the global circuit.

“I have a couple of them, but one is to be as light as you can on your feet. Generally, I’ve noticed that a lot of people are very loud when they land on the ground, hitting the ground very hard, so try to consciously work on being very light.”

Now that he’s been traveling to compete on the global stage, D’Souza has developed a greater appreciation for his chosen home base of Manali, and he’s determined to build himself into a world-beater from his own backyard.

“Since I started doing this sport full time five years back, my goal has not changed. My goal has always been to compete at the highest level with the best guys. When I’m at the start line, I want to be a serious competitor.”

Even with all of his early accomplishments, D’Souza has yet to hire a coach. He relies on his connection with the mountains to guide him.

In 2016, D’Souza became the first Indian to qualify for and finish the Spartathlon, a 246-kilometer (153 mile) footrace from Athens to Sparta held annually in Greece. At just 23 years old, with only a few years of experience, D’Souza completed the race in 33 hours, 2 minutes and 25 seconds despite the impending “death bus” chasing after him as a looming checkpoint cutoff.

D’Souza suffered severe tendonitis during the race that left him in a wheelchair for the next three days and unable to walk for the next week.

After the Spartathalon, D’Souza reeled it back to 100k races max and focused on balance in his training schedule and intensity.

During tough times in a race, D’Souza reminds himself of his preparation.

“When it comes to the race, I just need to remind myself of all the hard work I have put in and how disappointed I would be if it goes to waste, If I don’t push myself and give it my best.”

On a speed ascent project like Deo Tibba or Mount Friendship, satisfaction only comes to D’Souza if he pushes himself hard enough. Time is secondary.

In this episode of The Outdoor Journal Podcast, D’Souza discusses how he balances training enough mileage in advance of a race without wearing down his body, how he prepares for an alpine speed challenge, and those moments of feeling high up in the mountains of Himachal Pradesh. [Listen to this episode of the podcast].

Check out Part 1 of our discussion with Kieren D’Souza and stay tuned to The Outdoor Journal for continuing coverage.