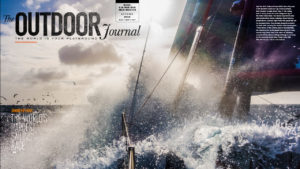 “What’s the use of a fine house if you haven’t got a tolerable planet to put it on?” Henry David Thoreau

You can support The Outdoor Journal here.

The sky is a great blue dome encircling us. I travel, from Oman to Mongolia, Italy to California. Everywhere I go, the same sky, an azure that reminds me we are all on one Earth…

But this world is changing. Billions are clamoring for lifestyles they see on TV and the internet. They want malls and bars, smartphones and cars. In these places, the sky turns from blue to a frightening gray, forests disappearing and deserts spreading. Jungles turn to apocalyptic concrete sprawls and rivers to sewers.

“Nationality” is an artificial construct. Today, we’re better connected than ever, yet free movement for most of humanity is harder than ever. This should be a post-national century. The outdoors is the whole world, our planet. Climate change is affecting everyone, whether they live in India or the United States. We mark lines of ownership on maps, but pollutants drift across the planet without hindrance from such petty notions, and oceans rise to swallow every coastline on Earth.

A Nepalese climber shares the same love of the mountains as a climber from Colorado. But why don’t we hear their stories as often? The Outdoor Journal is beyond borders. We look for stories of the outdoors from everywhere in the world and seek to share common human experiences that unite us as a species, as inhabitants of this spaceship called Earth. How can we change what people want? Through storytelling. Stories are a force for change, a virus of art, culture, emotion, desire and all that makes us human. The Outdoor Journal is not a magazine. It is a vehicle for change, by whatever means necessary. We believe we need to change consumption patterns and growth models in developing countries. We believe in influencing new generations of humans across the planet. We understand that it will be a long battle. But we’re ready to fight.