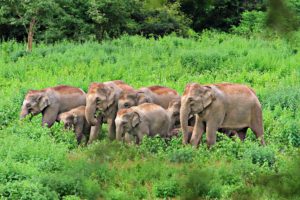 Bringing Back the Giants in the Land of a Million Elephants

With care and awareness, the endangered Asian Elephants in Laos could be saved. Ecological conservationists, tourists, and local mahouts are trying to make it happen.

Elephants need a natural environment to live healthy and sustain their population. They enjoy traversing through interesting forest routes, and find food and water from lakes and rivers within that habitat. When their life is such, they flourish when living alongside humans and grow in healthy numbers.

In Laos, this is how Elephants lived for decades, and the reason why the country is called “The Land of a Million Elephants.” Well, technically, there were thousands of them.

However, reports have indicated that unsustainable development, timber industry, and illegal trade have reduced that number to mere hundreds in the last three decades. Today, these Asian Elephants (Elephas Maximus) are enlisted as endangered on the IUCN Red list. Research shows that only 600-800 wild elephants and around 500 captive animals remain in Laos.

“Most of our elephants were working in the logging industry and they were raised in isolation.”

Understanding the challenges faced by the current elephant population, a group of veterinarians, wildlife biologists, and conservationists set up the Elephant Conservation Center in 2011. They work together to create a more harmonious space for elephants and humans. The center rescues captive elephants from the logging industry or circuses and helps them recover in a natural environment. The local mahouts genuinely care for their survival, since their livelihood needs are met by the center.

“We always work closely with the mahouts since they know their elephants very well.”

“Most of our elephants were working in the logging industry and they were raised in isolation. When we rescue them, we need to observe their behavior and try to include them in one of our social herds,” said Anabel, the resident wildlife biologist at the center, when interviewed by The Outdoor Journal.

“Once the day is organized for the elephants, we monitor their behaviors by going to different areas and observing them from the observation towers. In these towers, we always work closely with the mahouts since they know their elephants very well,” added Anabel.

“When I was a young boy, I remember seeing a lot of elephants, particularly during festivals. Nowadays, the number has tragically decreased.”

Poor law enforcement and an increasing human population has been detrimental for the elephants of Laos. The report published by AESG indicates just how much the captive elephants have overworked in the logging industry in the last two decades.  Many of them are illegally traded for tusks and circuses, which often generates a higher income for the locals.

In times of simple living, however, things were different. According to Asian Elephant Specialist Group (AESG), in the late 1980s, the elephant population in Laos ranged between 2000 – 3000 animals, of which almost 1332 elephants were domesticated. The earlier reports show that their population existed in at least 23 National Protected Areas, and a healthy number was seen even outside those preserved forest ranges.

“When I was a young boy, I remember seeing a lot of elephants, particularly during festivals. Nowadays, the number has tragically decreased,” said Thao Phayphet, a Laotian expat currently living in France. It’s been forty years since he moved from Laos.

The breeding period can be up to 3 years, and locals of today consider that as a loss.

This human tendency to build unsustainably has led to breeding issues and habitat loss for Asian elephants, who once used to roam freely and were considered auspicious by the locals. According to the latest scientific report, both wild and captive elephants share similar threats and conservation difficulties, including “habitat destruction, poaching, increasing conflicts with local human populations, and risks of inbreeding depression.”

The report also indicates that the locals don’t want to wait too long for captive elephants to breed, since it affects their work and income. The breeding period for these species can be up to 3 years, and locals of today consider that as a loss.

“it will take 35 years before the population grows again”

And that’s not the only issue at hand. The situation gets trickier since captive elephants are unable to breed amongst themselves, and partially depend on the wild ones. The latter group, however, is at risk of illegal poaching and trade. Consequentially, there aren’t enough of the wild ones to breed and sustain the overall population. The report shows that number of wild elephants has declined from 400-500 elephants in 1990 to 60-80 in 2010.

The Elephant Conservation Center was set up to make sure that these beautiful creatures have a chance at living and breeding. Thanks to increasing awareness, even the Lao government, in addition to International NGOs have recently stepped up.

The WWF set up Nam Pouy Sanctuary in collaboration with the Lao government, to ensure survival of wild elephants. A recent news article by News Desk, reported on the efforts of the current government to create conservation policies, with the support NGOs to increase the Asian elephant population in Laos.

“It is very difficult, but if people became more aware about the situation it might help to save the elephants.”

“The main challenge is to educate the public (western and locals) about the problems of these animals, how we are all involved in their extinction and what we can do to improve their situation. It is very difficult, but if people became more aware about the situation it might help to save the elephants,” said Anabel, the wildlife biologist at the center.

Jozef, the communications manager at the Elephant Conservation Center, mentioned that they are also in the process of collaborating with the government to get more space for captive elephants. “It’s a long process, but at least it’s a start,” he said.

“I was happy to see a team from many countries take care of them, show them to tourists, feed and raise baby elephants.”

On a community level, the Conservation Center raises awareness about the way elephants deserve to be treated. The tourists watch them from a distance and walk with them in nature, instead of sitting on their backs. The visitors also engage in sessions that educate on current challenges and pose ecotourism as a possible solution.

“I was happy to see a team from many countries take care of them, show them to tourists, feed and raise baby elephants. In Southern Laos, they organised a ride with elephants, near our place in the village. The owner said that it’s very expensive to take care of them, and mahouts need help from the government, or an NGO, to continue seeing elephants in the future,” explained Thao Phayphet.

Elephants are beautiful creatures that have been worshiped for generations in Laos. Caring for elephants is not just about visiting places like the Elephant Conservation Center. It also means not entering spaces or buying products that attract tourists and consumers for superficial purposes, such as circuses or ivory-based items. When consumers become conscious and locals are provided with alternate livelihood opportunities, the population of Asian elephants in Laos will automatically begin to thrive.