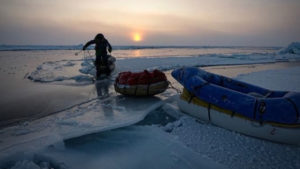 Equipped with only the supplies in their sleds, and powered with nothing more than their own two legs and unwavering determination, legendary explorers Mike Horn and Børge Ousland fight on.

They’re almost at the end of the gruelling adventure, but also at the end of their supplies, wits, and well-being. The ice has been shifting, throwing them off course many times, they witnessed unprecedented rain in the middle of the arctic winter, the ice is thinner than ever, injuries are getting more frequent… How much longer can they hold on? Jessica Horn gives us the latest details.

LF: There’s a lot of sensationalist clickbait regarding Mike and Borge’s current situation, which is supposedly dire; can you set the facts straight?

“… they have lost approximately 10 to 15 kgs each, and are starting to get frostbite on their fingers, toes, and noses.”

JH: Mike and Borge are currently at 84 degrees North. They were originally hoping to reach this point earlier in the expedition but due to the terrible ice conditions, a lot of open leads, press ridges and an unfavorable drift, the two explorers did not progress as fast as they had originally hoped. They are physically and mentally exhausted, they have lost approximately 10 to 15 kgs each, and are starting to get frostbite on their fingers, toes, and noses.

They are today at their 75th day on the ice and they only have 9 days of food left, with approximately another 400 km to reach the end of the ice cap.

Expedition Update 34: Safe to say that I’ve had easier weekends in my life as an explorer. After last week’s endless obstacles and difficulties, @borgeousland and I are grateful to start the new week with a fresh mindset. Today, despite our sores (as seen on this photo), we are feeling tired but unstoppable…we know the end is near, so now, we must gather up the strength we have left, and fight to get there. What better way to start the week than with a massive storm?! We therefore had no choice but to set camp and wait for the chaos to pass before we can confidently venture outside again. Maybe this is a blessing in disguise in some weird way…our bodies were really in need of some rest after the physical and emotion exhaustion we went through over the weekend. Although we have rarely been in such a bad storm, the bright and uplifting side is this! Finally the wind is in our favour pushing us towards the south, rather than back to the north. This good news certainly gave us an energy boost, and the confidence that maybe we will be able to end this expedition the way we have initially planned. This unexpected turn of events must be due to all the positive vibes you have been sending our way. @AnnikaHorn and @JessicaaHorn have been updating me with your messages of support and I can only admit that this has been giving us the kick of energy we needed. It is a hostile world up here…and the constant unstable conditions have made it quite clear that we are not welcome here. In some twisted way, I ask myself if nature has been taking it out on us because of the manner in which we humans have been treating and respecting our planet…one thing is certain, something is obviously not quite right. With just over one week of food rations left, we are carefully planning each and every next step. We are longing to get home, but there is no giving up…we are here to fight until the very end. Thank you all for your heart-warming support, we will be keeping you closely updated! #NorthPoleCrossing #Pole2Pole #MikeHorn

LF: If indeed there’s a need for rescue, how would that happen, if at all?

JH: There are multiple options, if it is an urgent need for rescue we would send a helicopter to pick them up. There is also the option to do a food drop. Otherwise, there is also the option of sending a bigger boat up North to meet up with them, but this would require them to walk more South to make it to the meeting point.

LF: The Pangaea managed to get to 85 degrees latitude which is unprecedented for any sailing vessel to reach that far North without the assistance of an icebreaker. Mike’s reports often mention thinner than expected ice. Not a single polar bear encounter in the more than 2 months of crossing the North Pole. What’s your take on all these ‘anomalies’?

“Mike and Borge witnessed rain at the North Pole, rain! That is not normal.”

JH: It is clearly the drastic consequences of climate change. When Mike and Borge went to the North Pole 13 years back during their first winter expedition to the North Pole at the same time of the year, the ice was a lot thicker which made it easier to progress safely. Today, due to a warmer climate, the ice cannot rebuild itself during the winter to create a multiyear [sic] ice, which thus makes it a lot more complicated for the explorers to progress as they need to be extra careful where they step. It also creates more pressure ridges due to the acceleration of the drift which add obstacles on Mike and Borge’s path which they sometimes need to go around as they are too big to climb over. There are also drastic changes in temperatures from -40 C to +2 C which is totally abnormal. Mike and Borge witnessed rain at the North Pole, rain! That is not normal.

JH: Due to all the climate changes it is making the expedition a lot more challenging for both explorers who are experts in exploring the polar regions. Mike even says that these are some of the most dangerous conditions he’s ever faced.

Expedition Update 19: Today was another interesting day on the ice. It started out with complete whiteout conditions, in which we could hardly see the tip of our skis. Having to cross freshly frozen water leads in these conditions resulted in very slow progress, we couldn’t see the state of the ice beneath us, but we could hear the sound of it breaking up under our feet. In situations like these, you feel completely helpless. It is as if you were blindfolded and told to walk in a straight line while avoiding the open water traps beneath you. For the first time since we left Pangaea over 20 days ago, the wind had stopped. The skies were heavy with dark clouds but the wind had completely faded. A sensation of quiet relief overcame @BorgeOusland and I, but that sensation quickly vanished when we realized that no wind would make navigation even more difficult for us due to the lack of direction indications. After about 6 hours of skiing the clouds disappeared and a beautiful light made its appearance in the Arctic – it was like magic. Temperatures dropped to around -22C and the snow turned abrasive making progress even slower due to the glide of the sled against the ice. It felt like I was dragging it through wet sand, but the beauty of the Arctic light made up for that struggle. What I have realized in this situation, is that there is always something to be happy about. Yes there will be moment directions of hardship when things don’t always go your way, but in those moments tit is important to at least try and find the positives. It is all about the way we thing and the way we look at things. #NorthPoleCrossing #Pole2Pole #MikeHorn

LF: Will you be at the pick up? What’s the first thing you’ll do when you get to be back with your dad and what’s next?

JH: Yes Annika and I will be heading to Svalbard as fast as we can and wait there with our team for Mike to tell us which PoA [Plan of Action -Eds] we need to execute. They still have 9 days of food left and will push themselves to try to make it as far South as possible and as far as their rations can take them. When I finally see him, I will squeeze him so tight and tell him how proud I am ! … and then send him straight to shower.

Thank you to Jessica Horn for the update.

A couple of years ago, The Outdoor Journal joined Mike on several adventures and while crossing the Australian desert together, he shared some of his Arctic stories with us around a cosy campfire.